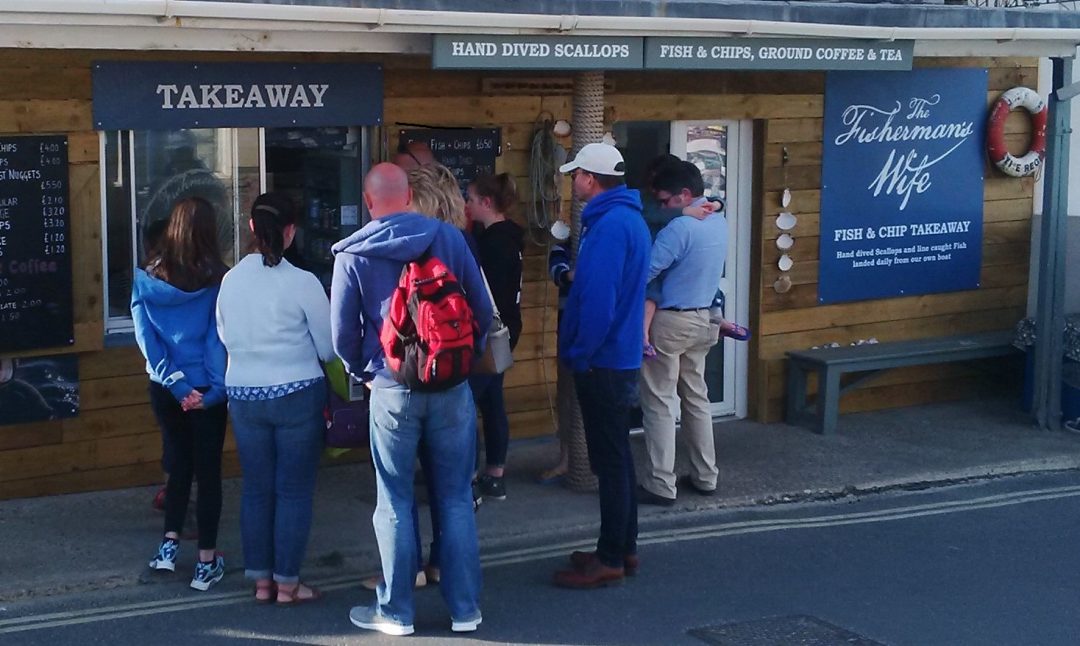 The (for the time being) final curtain in the Brexit drama is rising these days, but it does not look like a good ending for the British financial and fund industry. Until recently, the biggest opportunity seemed to be “Fish for Finance“. But that is unlikely to happen. British financial firms are sitting on dry land if they do not have their own branch in the European Union by now (read the whole article as a PDF). Until the cancellation of British Prime Minister Boris Johnson last Friday, “Fish for Finance” – a possible trade between fishing rights for EU fishing boats in British waters on one hand and access for British financial products to the European Union on the other – looked quite promising. Haddock for funds or cod for derivatives, so to speak.

The fact that fishing in the seas around Britain has regained such importance in the talks between UK and EU negotiators is not so much because of its economic importance. Although the UK has one of the most productive fishing grounds in Europe, and its fleet brought home the second largest catch in the EU last year (502,000 tonnes of fish worth around £851 million), [1] fisheries account for only 0.1 percent of the UK’s total economic output.

But because many fishermen from England, Scotland, Northern Ireland and Wales were (and still are) strong supporters of Brexit and the issue remains very important on the island, the EU skilfully used “Fish for Finance” in the negotiations.

For example, Irish Deputy Prime Minister Leo Varadkar (who was head of the Irish Republic until a grand coalition was formed in June) warned that without agreement on this issue, British companies would not be able to do business in other sectors. Through the BBC, Varadkar told the British neighbours in January: “You may have to make concessions in areas such as fisheries to get concessions from us in areas such as financial services”.

Only one in eight companies are prepared

Companies from the United Kingdom could urgently need a deal, as developments in recent months have shown. Of all G20 economies, the UK economy, which is heavily dependent on services and domestic consumption, is likely to be hit hardest by Covid-19 and the lockdown.

Although Brexit (whether with or without a deal) has been threatening for years and it was clear since the beginning of this year that the UK would definitely no longer be a member of the EU from 1 January 2021, the withdrawal still gets many companies on both sides of the channel on the wrong foot. In a recent survey conducted by auditing firm Ernst & Young, only 13 per cent of the participating companies said they felt prepared for an UK withdrawal.

“It is astonishing to observe that there are still many companies from the UK that are barely prepared for the time after leaving the EU,” says Robert Scheid, Director of the London office of Germany Trade & Invest (GTAI). “German firms have generally carried out significantly more preparatory work in relation to Brexit”. [2] In recent years, the GTAI has assisted many British companies to open branches in Germany. Last year, with 185 projects, Great Britain provided the second highest number of all new foreign branches and expansions in Germany – only surpassed by the USA (302 projects), but still just ahead of Switzerland (184) and China (154).

In Great Britain, on the other hand, foreign trade with the Bundesrepubik Deutschland is stagnating considerably. British imports of goods from Germany – especially in the automotive industry and mechanical engineering – collapsed under the influence of Corona from January to July 2020 by a nominal 25.2 per cent year-on-year. “In many sectors, investment in production facilities is currently out of the question,” confirms Scheid’s colleague Marc Lehnfeld of GTAI.

Great Britain, on the other hand, seems to be standing still or even going into reverse. This has been very evident in recent months in the development of employees and assets in the financial sector.

The number of employees in the British asset management industry, unlike in other European countries, remained rather static this year, reported the industry information service Ignites Europe in early October, referring to data from The Investment Association. Since the Brexit referendum in June 2016, the number of people employed in the fund industry has only risen by just under six percent in the UK, but by nine in France over the same period, twelve in Ireland (between 2016 and 2018) and by a whopping 31 percent in Luxembourg.[3]

The news that the US bank JPMorgan Chase intended to transfer assets of around USD 230 billion and relocate 200 of its employees from London to Frankfurt also raised some eyebrows. And that was just for starters …

(Added 3 Nov. 2020: According to the Deutsche Bundesbank, 64 banks, financial service providers and investment firms from the UK have submitted licence applications in Germany – and the supervisory authority has already given the green light to over 40 of them. By the end of the year, the Bundesbank also expects the five largest banks coming from the Thames to the Main to transfer 397 billion EUR in balance sheet items.)

Since the Brexit referendum, 7,500 financial jobs have been transferred from Britain to the EU.

Since the referendum, according to calculations by Ernst & Young, over 7,500 jobs in the UK financial industry have been transferred to the EU and 24 financial firms have publicly stated that they want to transfer assets worth more than £1.2 trillion to the EU. By way of comparison, according to a recurring survey by the Reuters news agency, hardly 2,000 jobs had been relocated from the UK in early 2019 due to Brexit (also see our earlier article and infographic: “The quiet before the Brexit storm“).

The exodus of staff and assets has certainly been partly due to warnings by the European regulatory authority ESMA, which wants to impose stricter transparency requirements on investment managers from non-EU countries. The British financial regulator FCA is now trying to get its members in line with EU standards by the end of March 2022.[4]

For British financial services companies that have still not dared to move to the European mainland, things are getting tight. Some smaller companies may hope that it will be enough to open up to European customers by translating the website into German … but uncertainty remains as to whether and under what conditions asset managers from London, Edinburgh and Bristol will be allowed to provide investment services to clients in the EU after Brexit. Also, the question remains whether it is still worthwhile for companies based in the EU to transfer fund management functions to a non-EU fund manager under new ESMA requirements.

Sebastiaan Hooghiemstra, investment specialist at the Luxembourg law firm NautaDutilh, says the new standards are a blow to all non-EU fund managers and increase the administrative burden on non-EU investment companies. “Third-country firms should instead look to set up their own subsidiary with a MiFID II licence in mainland Europe”, Ignites Europe quotes the lawyer.[5]

Especially for smaller investment houses from Britain, it is high time to take three steps before the transition period ends at the end of December: First, to assess the importance of European clients for ist existing and future business. Secondly (in case an exchange with the EU is still considered important) to adapt their own regulatory framework in line with ESMA requirements. And third, to actively communicate the commitment to the European market to customers and business partners.

So, why not invite the best contacts to the island for a portion of fish & chips and a pint of beer to celebrate that?