Europe in challenging times: Panel discussion in the British Embassy in Berlin 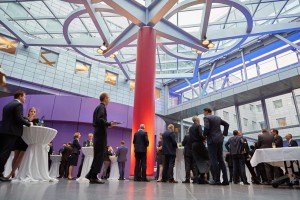 It seems to be a platitude that Europe is going through challenging times – in the face of ever so obvious disparities between the Northern and the Southern states, the upcoming exit of Great Britain from the European Union (Brexit) and the ongoing pressure through low interest rates in the eurozone. But which effect do these political and economical centrifugal forces have on pensions in Germany? What are the consequences for independent financial advisors and their clients? Standard Life Deutschland followed these questions in a top-class panel discussion in Berlin which was jointly organised by the British insurer and the British Embassy. Among the participants on the podium were Wolfgang Bosbach, former MP of the CDU and pension expert; Prof. Dr. Clemens Fuest, president of the economic think tank ifo Institut; and Sir Gerry Grimstone, Chairman Standard Life Aberdeen plc. Gerle Financial Communications supported Standard Life in prearing the event with regards to the content.