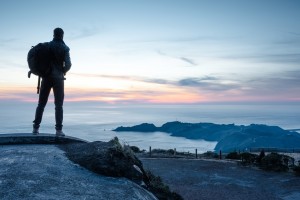 It’s the year 2023 and Brexit negotiations have gone terribly wrong. As a consequence, the UK has dismembered itself, an exodus of firms from London to mainland Europe has taken place − and the Shetland Islands are now in third place behind Luxembourg and Ireland for the registration of new funds. A short story by Hagen Gerle, Gerle Financial Communications.

A picture from a family holiday in Cornwall, the 2020 stand-up metal award for ‘Best British Alternative Asset Manager (over 3 yrs.)’, a copy of a runners’ magazine – there weren’t many personal belongings left that Adam had to put in his cardboard box this morning. Most of the other stuff had already made its way into his small flat where the big removal boxes were piled up against the wall, or he had simply chucked them in the bin. ‘Travel light’, he told himself. ‘You’ll buy what you need in Helsinki.’

Helsinki … Adam still couldn’t quite get his head around how Finland’s capital had become the hottest spot for asset managers on the Continent. Not just for investment companies from London, Edinburgh and Glasgow, but for all artificial intelligence-savvy fund managers. The fight ‘active vs. passive’ had been decided pretty clearly through the introduction of the new generation of AI based investment algorithms.

There weren’t many British asset managers left to emigrate to Finland anyway after the Brexit negotiations had failed so badly. By spring 2018, most of the British and foreign banks, insurers and asset managers had had their contingency plans in place, their location scouts on the ground and their applications ready for a move to Europe. And, despite a rumoured French plot to “raid British firms”, many of the banks had relocated their businesses to Frankfurt while the insurers mainly went to Dublin, private equity firms to Luxembourg and asset managers to Helsinki – and of course, to the Shetland Islands. France, on the other hand, which had just snatched the European Banking Authority (EBA) from London, wasn’t amused about that outcome at all.

Oil-rigs-little-ponies-oily-fish-bloody-Shetlands! Adam could not help himself but laugh out loud thinking about it. Well, there wasn’t anyone left in the office, all the desks were empty and any hardware was stored in boxes ready to be picked up later by a private courier. To Adam’s relief, the Italian coffee machine was still unpacked and working. He would dearly miss it. But the Finns were keen coffee drinkers too, weren’t they?

The Shetland Islands, Adam recalled while brewing his last cup of coffee in the old office, had somehow managed in all that hard-Brexit-over-the-cliff turmoil to come out as a winner and establish themselves as an international tax haven. Sort of the ‘Cayman Islands in the North Sea’. First, when Brexit talks had turned ugly and it had become obvious that former Prime Minister Boris Johnson had no clue whatsoever where the whole thing was going, Scotland, Wales and Northern Ireland had pulled the plug and declared their individual independencies. ‘From the United Kingdom to Little Britain in one day’, so to say.

Then, while putting up a hasty plan to re-join the EU, Scotland had somehow forgotten to include the Shetlands in their planning. The local government there was not particularly happy and simply declared its own independence, with New Bitcoin as the single currency, a corporation tax of only 5% and a massive marketing campaign to get the bosses of investment firms to domicile their firms’ management teams on the little islands. Nordic twilight tours and pony riding for the boss’s children included. ‘They sure did their homework right’, thought Adam sipping his espresso.

The thorough, decisive plan had worked out: Last year, Shetland Islands were rated third place for the launching of new funds behind Luxembourg and Ireland. Billions and billions of Euro assets in funds! Despite having visited the islands a couple of times for business, Adam was relieved that he did not have to relocate to Shetland in the North Sea but to Finland instead. He had to admit commuting to the islands had a certain charm, though, with hovercrafts and water planes from Aberdeen to Lerwick operating three times a day now while the tube in London had to close down regularly due to a shortage of energy, leaving people to walk along the tracks.

London? No future here. With the exodus of not just some businesses related to the financial industry in Europe in spring 2019 but almost all of them, the City had collapsed within a year. As companies left the once iconic high-rise buildings one by one, people made their own move. Lots of them started to inhabit former office spaces, encouraged by a new law issued by the Labour government called ‘The Gherkin housing act’. Adam’s sister Claire was one of them (and he had to remember to bring his precious office coffee machine to her apartment on the 28th floor of The Shard later today).

The money which was needed to partially compensate the owners of those buildings (mainly some large real estate fund managers and overseas billionaire oligarchs) was taken from British bank accounts of EU foreigners living in Britain. In the chaos of the Brexit negotiations, the government had decided to freeze all EU passport holders’ bank accounts identified since 2017. It promised to pay out the money within half a year until the future “special relationship with the EU” had been settled. This special relationship never saw the light of day and so the money (which, in legal terms, had been stolen) never reached its original owners either. Thousands of Polish, French and German families fled the country bankrupt because their assets were frozen, seeking support from the EU High Commission to sue the English government for unlawful confiscation.

Adam wiped his desk with a napkin from Costa. The coffee chain had closed its last but one franchise in the City two weeks ago, leaving hundreds of angry coffee customers waving their coffee cards outside the shut doors. There would be coffee shops in Helsinki, of course, and they would have the fastest WIFI on the planet, Adam knew.

Thanks to the immense amount of energy that Finland was now harvesting from a mix of hydro-electric power plants, offshore wind parks and the residual heat of private saunas, they were able to supply even the biggest demands in energy and broadband of corporations. That included all the electricity intensive firms as well as the currency traders that were mining digital currencies as the New Bitcoin which in turn made Helsinki Europe’s new money capital.

Anyway, Adam would soon find out how sweet life among the Finns really was. His wife Michelle and the children were already there, enjoying first class housing, a top quality primary school education and a 30-hour (fully flexible time, of course) contract in a biological research facility for Michelle.

Right, time to go. Adam put on his coat, grabbed his box with one hand and the office keys with the other. He switched the lights out, closed the door and locked it without looking back once. ‘Time to get a coffee in that last Costa shop’, he thought and started walking down the stairs.