The “Brexit” in the German press (infographic) 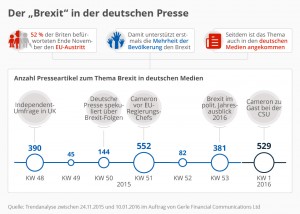 Since a majority of the British supported United Kingdom’s exit from the European Union (EU) for the first time, according to a survey by the newspaper The Independent end of November, the so called “Brexit” is making the news in Germany, as well. In the following six weeks after the publication of the survey more than 2,100 articles were published in the German printed and online press. Focus of the coverage was on political and economic consequences of a Brexit, mainly for the UK, as well as on negotiation efforts of the British Prime Minister David Cameron who announced an EU referendum for the first time in January 2013. These are the results of a research among 2.06 million German press articles on behalf of Gerle Financial Communications, a UK based PR consultancy specialized on financial services companies.

Almost 400 notes, features and commentaries alone could be found in the German media in the 48th calendar week when The Independent survey was published. According to that, a majority of 52 per cent of the 2,000 Brits questioned were in favour of leaving the EU if the announced referendum would have been held at that time. The majority of the EU opponents were elder citizens with lower education, living in the South and Southeast of the country. On the other hand, supporter for a UK in the EU are strong among younger, better educated, the Welsh and the Scots.

Speculations about the consequences of leaving the EU

Two days after The Independent, The Evening Standard topped it by publishing another survey: According to that 58 per cent of the British believed that a Brexit would not harm the UK economically. A quarter even said it would help the country. This survey did not make it into the German news, however.

The following two weeks a number of articles was published (189 in total) dealing with the Pros and Cons of an exit and potential economic consequences, especially for the UK, through companies moving abroad, loss of jobs and decline in taxes. Most articles, 552 precisely, could be read in the German media in the week before Christmas: On December 17th and 18th, Cameron presented his four core demands for a reform of the EU before other heads of EU countries in Brussels. He got a brush-off, however, due to his demand for a four-year cut of benefits for EU immigrants in Britain.

Around the turn of the year, the word Brexit could not be missed in any review nor forecast – 381 articles were published in the German media about that time. At the beginning of this year, it was David Cameron again who kept the issue in firm media hands. He granted his ministers to vote freely about staying or leaving the EU in the upcoming referendum (only to back off a bit afterwards). However, for the German press, Cameron’s visit to the party convention of the Christian Social Union (CSU), the sister-party of Angela Merkel’s ruling CDU, in Bad Kreuth at the time was of higher significance and reached 529 mentions – the second highest number within the entire observation period.

As a result, this high amount of mentions about the Brexit in the German press leads already to the conclusion that the issue will gain in media related importance in the coming months. The interest of the German media towards the sentiment and opinions of the British will surely intensify during 2016.